The Birth of 'Starstruck' 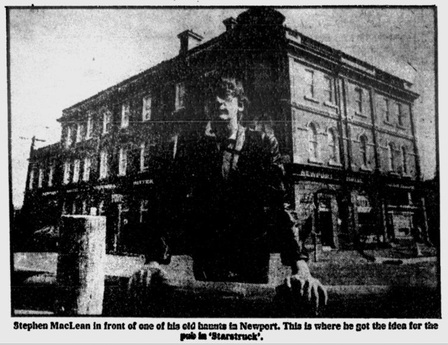 More than a bit starstruck himself, Stephen was determined to break into show business. As in Starstruck, a devoted family member - in this case, his older sister Colleen - would spend many hours at a nearby public pay phone, trying to help him get his big break.

Stephen spoke to The Age in Melbourne about the origins of the story:

"The Newport Hotel, which is just by the Newport railway station, is where 'Starstruck' began. My mother used to work there, and it was a really thriving place, really bustling, until they put in the overpass. Then the pub just died. That's where I got the idea of the fading pub in 'Starstruck'.

Rene, the woman who ran the place then, is dead now. I got a tape from her son while I was overseas, about her death, and it really started my memory going. I started jotting things down, and I finished the first draft while I was in London.

I spent so much time in the place. I used to get into trouble all the time for going up and dancing on the roof, so the chandeliers started bouncing in the dining room.

I had got out in the world really early. I left school the week I turned 15 and went and lived in a flat in St Kilda which was considered pretty daring then. I had been a child actor when I was about 11, doing Crawford's TV shows. When I turned 15 I went to Crawfords as a messenger and pretty soon I started doing props. When I was 16 or 17 I was designing 'Homicide' [a successful Australia TV cop show].

All those dreadful sets where the walls shook when they closed the doors, that was me. I did 'Video Village', all those kinds of things. Then when I was 19 I switched to being a journalist with 'Go Set' [a popular music magazine]."

Incidentally, the 'real' Starstruck hotel is still in existence at Newport in Victoria. It now operates as the Seagulls Nest Club, home of the Williamstown Football Club. 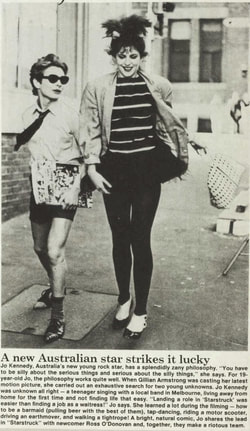 Australian Women's Weekly, 3 March 1982
Producer David Elfick had a number of pertinent connections to the subject matter. He had worked alongside screenwriter MacLean at Go Set Magazine, where both of them would befriend a young Ian 'Molly' Meldrum, who would play a pivotal role in Starstruck's production and promotion.

A number of different directors were shown the script for Starstruck, but the one who was eventually chosen seemed the most unlikely: Gillian Armstrong, whose debut feature, the historical romance My Brilliant Career (1979), was a critical and popular hit. Since the success of that film, Armstrong had been flooded with scripts for dour period dramas, and was searching for an entirely different kind of project.

"I had my agent tell them [screenwriter Stephen MacLean and producer David Elfick] I was interested," she recalled to the Sydney Morning Herald, "and they replied they weren't really interested in me because I made these boring period pictures."

It was by more unconventional means that Armstrong convinced MacLean that she was up to the task. The two ran into one another at a party, Armstrong wearing a striking pair of vintage-style blue suede shoes that tickled MacLean's fancy and revealed a shared love of 'Old Hollywood'. "He told me 'anyone who wears shoes like that should be able to make my movie.'" Armstrong remembered. "I got the job." Her involvement was made public in January 1981.

​Clearly, the most important roles in the film would be that of Jackie Mullens, the madcap aspiring songstress, and her ambitious cousin Angus. The filmmakers deliberated for some time on whether the parts should go to experienced performers or raw new talent. Ultimately, they issued an open casting call, from which six pairs were selected.

A cheeky gambit won the day for 21-year-old Jo Kennedy and 17-year-old Ross O'Donovan. "At the second audition they told us to improvise auditioning for another movie and we decided to go all out at being young and silly. A week later we were both doing screen tests," Kennedy told the Sydney Morning Herald. Rushing in with a fire extinguisher, the pair claimed there was a fire in the building, and all but threw themselves out of the window.

The producers were impressed not only by their obvious rapport, but by the fact that the stunt came straight from the Angus Mullens playbook. For Jo, who had been living on unemployment benefits only a year earlier and attended her first audition wearing a tatty secondhand jacket, it was a long way to come. For Ross, who was currently completing his schooling in Victoria and had no prior acting experience, it was even further.

The film's $1.65m budget was increased to $1.75m as production approached - a relatively large amount for an Australian film of the time. $500,000 of this was contributed by the Australian Film Commission. 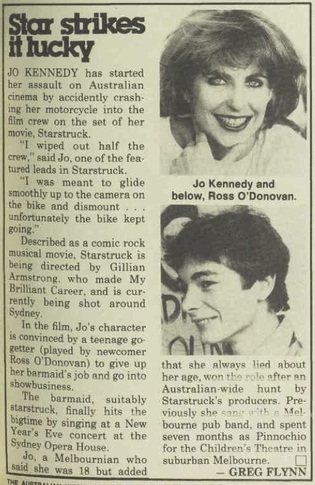 Australian Women's Weekly, 15 July 1981
The cast underwent two months of intensive dance training, a process which, according to Gillian Armstrong, also helped the actors to feel at home with one another. By the time shooting began, the rag-tag barflies who populate the Harbour View Hotel gave every impression of being old pals. "Dancing is the most fantastic way of bringing actors together," said Armstrong. "The group of people in the bar in Starstruck were so relaxed they felt they had known each other for a long time. It was fantastic and I think it really helped the film." Jo Kennedy, whose singing experience was limited to garage bands, received vocal training lessons from singer Janice Slater. She also spent some time working at a Kings Cross pub in order to appear authentic as a barmaid.

Veteran costume designer Luciana Arrighi was enlisted to design a series of ultra-modern costumes, and was responsible for the majority of the film's outfits. Due to other commitments, she passed collaborator Terry Ryan responsibility for clothing the dancers in the Lizard Lounge sequence.

Production designer Brian Thomson, who had just worked with Arrighi on director Jim Sharman's production of the play Lulu for the State Theatre of South Australia, was responsible for some of the film's most imaginative touches such as Jackie's fantastical beach-themed bedroom, embodying the film's thin line between outright fantasy and cartoonish reality. As Thomson explained to the Sydney Morning Herald in mid 1981, "I hate naturalism. I prefer to envision how a person might have felt at a certain time and place."

Shooting began in June 1981 and lasted for ten weeks. The complexity of directing the musical scenes in particular took Gillian Armstrong by surprise. It was not possible to provide adequate coverage with the number of cameras the production had at their disposal, and a dance sequence could only be filmed a certain number of times a day before becoming tired. This and other complications saw the budget balloon to $1.9m and eventually $2.2m over the course of production.

Probably the most energetic and effective of the dance numbers, 'I Want to Live in A House', was shot at the former Channel 7 studios at Epping. Gillian Armstrong asked choreographer David Atkins to use The Beatles' 'A Hard Day's Night' as his reference, and described the results as 'perfect'.

Filming ended in early September, and a rough cut was assembled by the end of the month. A final cut was ready by the end of 1981, in anticipation of a release to coincide with the 1982 Easter school holidays - as well as an all-important visit to the Cannes Film Festival, the world's biggest film market. 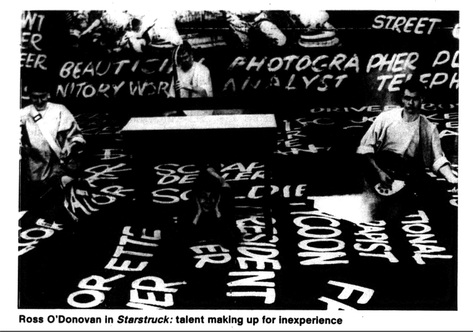 Image from the lost sequence, published in The Bulletin - 20 April 1982.
The original Australian release version of Starstruck lasted 105 minutes. Initial American trade screenings were reported as 102 minutes. At some point the film was cut down further, to 95 minutes.

As revealed in the 2005 DVD release, the cuts included some tightening of the musical sequences, while producer David Elfick recalled that a number of aerial scenes of Sydney were also cut for time reasons. In addition, versions circulating on cable television and home video  often omitted the song 'It's Not Enough'. What became of the other missing minutes?

A rare music video gives us part of the answer. Though some interviews imply that it was never seen in cinemas, many members of the film's original Australian audiences remember otherwise.

Director Gillian Armstrong has confirmed that the film originally opened in a schoolroom. Dreaming of his ambitions for Jackie, Angus falls asleep, and the audience sees the fantastic dream he has. Crashing through the walls of the schoolroom with a bulldozer, he is suddenly part of an elaborate music video for the title song, 'Starstruck', surrounded by movie stars, musicians and of course, The Swingers.

After waking from his dream, he rushed out to a nearby payphone in a sudden burst of inspiration, moving to the film's beginning as we know it today. ​

Some shots from this sequence appear in the Australian trailer for the film, and the visual motif was adopted for the cover of the 'Starstruck' single, but had it not been issued as a music video that somebody happened to record from television, it might easily have been lost forever. But why was it removed in the first place?

According to Gillian Armstrong, the 'Starstruck' sequence was cut when the film was being prepared for release in the United States, where distributors were concerned that the movie started too slowly. In addition, producer David Elfick felt that it did not match the rest of the film. While endorsing the removal of 'It's Not Enough' in the American release, Armstrong has since expressed some regret about the removal of this initial and very memorable sequence. Because the soundtrack was cut for the American version, the missing sequences could not be re-integrated when the film was restored by Australia's National Film and Sound Archive.

It might be argued that this sequence pushed Starstruck's exaggerated but basically realistic world too far into the realms of fantasy. Even so, it would have made a neat book-end to the film's concluding sequence, and was certainly eye-catching enough for many of the film's original Australian viewers to wonder what had become of it when they re-watched it in later years.

Without further ado, here it is.