Do you have any original interviews or articles about Starstruck? Please, drop me a line so I can include them on the website.

For a selection of post-Starstruck interviews with Jo, visit the dedicated Jo Kennedy page. 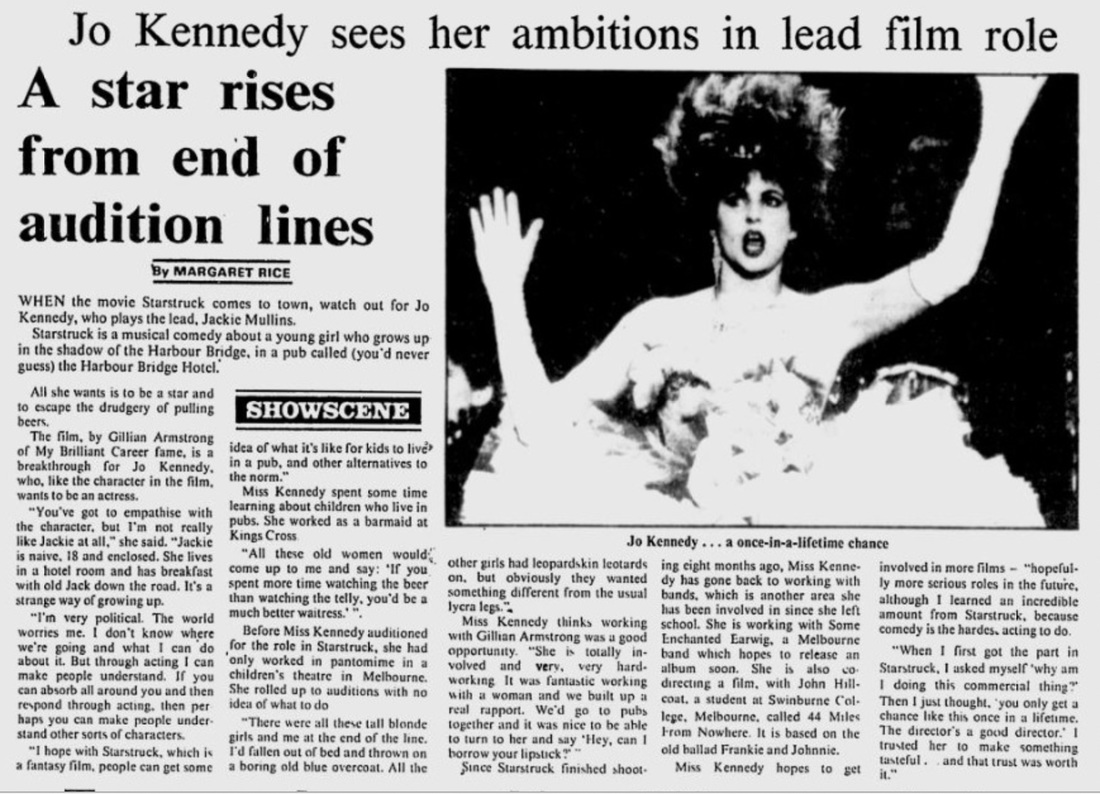 The National Film and Sound Archive interviewed Ross O'Donovan, who spoke about his life before, during and after the production of Starstruck. The full interview is available here. 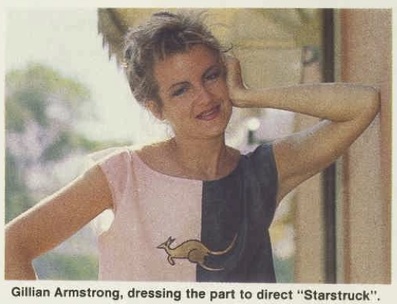 Gillian Armstrong is one of that class of director who really gets into her work. When she was making "My Brilliant Career", her first feature film and Miles Franklin's autobiography, she could have been a 1970s manifestation of Sybylla, the quietly independent and determined heroine of the story.

On the set, she was neatly dressed, her long, straight, honey blonde hair tied back in a sensible bun, her face free of make-up. Her achievement in that film, acclaimed by critics at the Cannes Film Festival in1979, has put her into the forefront of the Australian film industry.

The neat and restrained young woman who made "My Brilliant Career" has given way to the up-to-date starlet promoting her latest film, "Starstruck".

"I went on 'The Don Lane Show', and my friends didn't recognize me. They were amazed that I was so outgoing. I even did a little dance at the top of his stairs. I was a little amazed myself," said Gillian, who now looks as though she could have starred in her rock musical comedy rather than directed it.

Her hair, cut spiky on top, trails from a bun at the back. For television appearances, such as that on "The Don Lane Show", all the hair is down and teased to such an extent that the American host was moved to comment that Gillian looked as though she had put her finger into a power socket. In fact, she looks as though she would be quite at home in Hollywood, dressedas she is for this interview. She is wearing a pink and black shirt painted with a gold kangaroo over khaki trousers and definitely purple eye make-up. Only the directness of her gaze disturbs the popular film image of a rock star.

It is suggested that with her passion for taking on the persona appropriate to her films to market them, that the public should beware the day she decides to make a horror film. She laughs, delighted at the prospect of selling a film such as "An American Werewolf in London". None of the three scripts she is working on at the moment is a horror film.

Sitting in the slightly raffish and frayed offices of Palm Beach Productions (the house which financed "Starstruck"), she is working on the first draft of Alan Seymour's adaptation of Sumner Locke Elliott's novel, "Eden's Lost". This project will be produced by Margaret Fink, with whom Gillian worked on "My Brilliant Career". She is also working with the playwright Stephen Sewell on a script entitled "Dingo" which deals with a pariah in society. "I think we'll have to change the title," said Gillian, her gaze solemn. So, the work of genius is called "Her Eyes Looked Left" at the moment.

With Stephen MacLean, the writer of "Starstruck", she is working on "Intermission", Anne Baxter's autobiography about her life in Australia. "It is so nice to finish a picture and still be talking to the writer," said Gillian.

On her current trip to the US, on a scholarship from the Ladd Company, she will be travelling the country for three months, looking at films being made, meeting writers and talking to the company about her forthcoming projects.

"The only thing the company wants in return is to be allowed to look at my projects first, before I go to other investors," she said. "I think j this is the only company in America that I could wori for. It's vital and original. Il was the company which released 'Chariots of Fire' in the US. It's investing in Bertolucci's new film whicn he will make in Italy - in Italian."

She smiles as she considers the Ladd Company talent roster at the moment: Bertolucci, one of the greal film makers - and her.

Since her films have become popular, Gillian Armstrong has not been categorized as a feminist director but her concerns about women are obvious. Her first was "100 a Day", a film about a girl in a shoe factory during the Depression. She has also made a short called "Lollies and Smokes", about 14-year-old girls living in Australia with no real hope for the future. She worked on Tom Cowan's "Promised Woman", and then "The Removalists" as assistant director before undertaking "Career" and "Starstruck".

Gillian's life is relatively unchanged, she said, despite the success of "Career and the launching of her new film. She still lives in Balmain, where she lived while making "Career", still doesn't believe in marriage and has enough uninhibited spark to send a cheerio call on national television to her Nana - "I hope she was up that night, watching," she said.

Facing a future with any number of options. Gillian Armstrong is certain of one thing in her volatile life. "My next film will be made in Australia."

Director Gillian Armstrong attended a showing of the Australian National Film and Sound Archives restoration of Starstruck on Australia Day, 26 January 2016, giving an extensive interview on the production of the film.

If you have access to Facebook, you'll be able to see virtually all of her Q&A session, and hear Gillian's thoughts on ...
​

Phil Judd, lead singer of The Swingers, has had his ups and downs since working on Starstruck and has not spoken on the record very often. That is, until the release of his first album in a decade, Play It Strange, which is available here and comes highly recommended.

New Zealand music magazine Rip It Up has conducted an extensive four-part interview with Judd, which ranges across all stages of his music career and is essential listening for fans of his work:


Phil briefly touches upon his work for Starstruck in Part Three.

Head over to the Australian Screen website for a long profile of producer David Elfick by veteran film critic Paul Byrnes, which covers his career in great detail, including the production of Starstruck.